Ex Libris has started rolling out support for the OpenAPI standard. The standard is owned by the OpenAPI Initiative and is defined as a “specification for machine-readable interface files for describing, producing, consuming, and visualizing RESTful web services” (Wikipedia). By providing the specification for our APIs in OpenAPI format, you can now integrate with tools and libraries that support the standard.

There are many primers on OpenAPI on the web, so we’ll suffice with a high level overview here. Using OpenAPI, all of the parts of a REST API can be defined, including:

And as YAML as follows:

There is widespread and growing support today for the OpenAPI specification in many toolchains.

Swagger is a set of tools built around the OpenAPI specification, maintained by a company called SmartBear.

Tip: OpenAPI used to be called “Swagger”. The names were forked to create a separation between the community-supported spec and the toolset created and sponsored by a company (Smartbear)

The most popular Swagger tools include:

Here’s how the OpenAPI spec for the Alma Configuration API looks in the Swagger Editor:

And the same specification in the Swagger UI:

OpenAPI has wide industry support and continues to gain traction. A small sample of such support includes:

You can start exploring the OpenAPI specifications for Alma REST APIs with any of the tools mentioned in this post. Each API area (for example, Users) includes a new OpenAPI section at the bottom with links to the specification documents in both JSON and YAML. It also includes a link to the Swagger Editor which is a great way to dive in and learn about the sections of the specification. 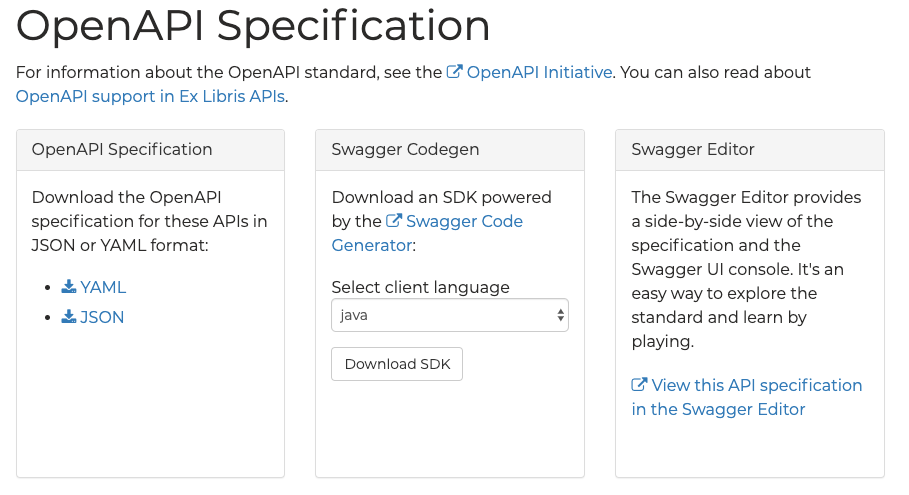 Keep an eye out for additional blog posts in the future on OpenAPI.